Bravery, Blood and Mud: the Khaki-clad Heroines of WWI

Physically fit enough to carry an injured man, technically minded to piece a torn apart ambulance back together, adept enough to manoeuvre an ambulance through dark and dangerous terrain, immune to the cold, mud and blood of war and brave enough to punch holes through the glass ceiling; these are the women ambulance drivers of WWI. Read on to learn about the superhuman women who underpinned both the war effort and laid the road for women in service.

In the early 1900s a woman’s ‘place’ was still firmly in the private sphere; at home, with the children. Of course, to society the dutiful and doting wife was being driven out by the spectre of militant suffragists. To the outrage of many, the suffragette movement was an aberration, an unnatural and unwelcome attempt at change. Despite the national fear that the notion of the silent, serene feminine homemaker was vanishing before their very eyes, the reality was that the expectation and limitation for women of the early 1900s were very much still the same. So you can only imagine the uproar that followed when some women dared to suggest they’d be better use on the Western Front of a World War than folding petticoats and producing children.

“My dear, you are overwrought and not seeing things in the right perspective. There are enough nurses to attend to the Army. Amateurs will be neither wanted nor welcomed, either as soldiers or nurses.”

By the time WWI had engulfed the world, as a woman, you would STILL most likely be laughed at if you announced you’d like to go off and drive an ambulance in war-torn France. Being a woman ambulance driver wasn’t seen as the same as joining the ranks of doting nurses, an angelic and admirable, feminine role. Although there was some resistance for some woman who showed interest in frontline nursing, it proved much less in comparison to the national resistance of having female ambulance drivers, a notion which proposed an ‘unnatural’ infiltration of the ‘male department of war’.

Despite the resistance, Captain Edward Baker was one of the few that saw the potential of a nursing/ambulance corps. In 1907 he set up a group of women that would become the First Aid Nursing Yeomanry Corps (FANY) but it wasn’t until 1916 that the FANY became officially recognised as part of the British Army’s war effort.

“Until one hears their voices, one would say they were men!”

Despite the relinquishing of resistance in the War Office, ‘gender confusion’ was still prevalent. Occupying stereotypically ‘male roles’, often better than the men themselves, whilst wearing very masculine uniforms meant soldiers, orderlies and civilians couldn’t quite believe what they were seeing. Yet despite this confusion, it was often reported that soldiers preferred these women drivers. The Times quoted a soldier who ‘would a thousand times rather be driven by a woman…They’ll look out for every pebble on the road, every jolt, and it makes a difference…when you have got a bad pain in your body.’ But just being ‘a woman’ was most certainly, no sole qualification for earning a place as an ambulance driver on the frontline.

‘Experts at the geography of hell…’

If you were a woman ambulance driver in France, you were required to do many things. One of those was maintaining your vehicle. The eclectic selection of vehicles at the disposal of the ambulance driver was notoriously temperamental. The FANY’s, for example, had access to vehicles such as Vulcan lorries, Ford ambulances, a Mors car as well as Unity’ the Unic ambulance, ‘Flossie’ the Ford ambulance and ‘Kangaroo’, Muriel Thompson’s Cadillac. These vehicles were bulky, with difficult engines and radiators that would freeze and women would often have to work on these difficult vehicles with limited tools and parts in extraordinary conditions. 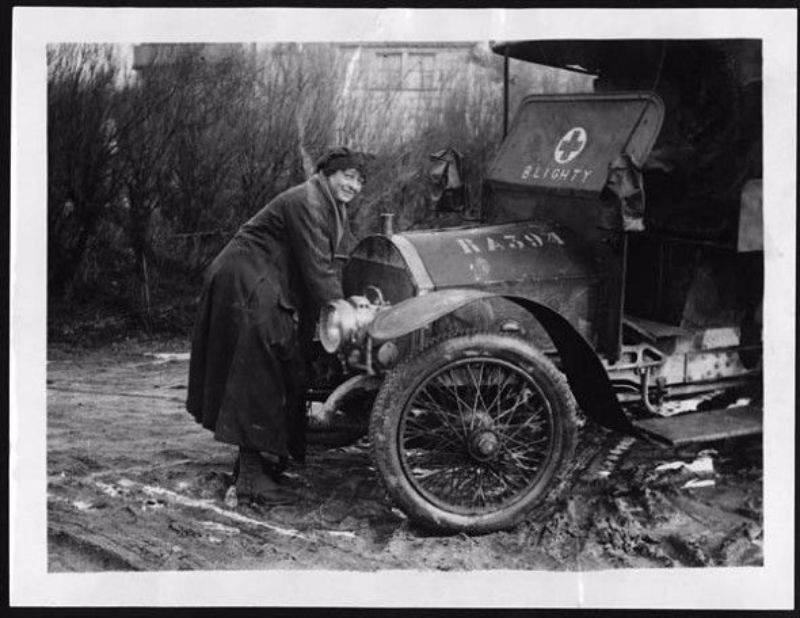 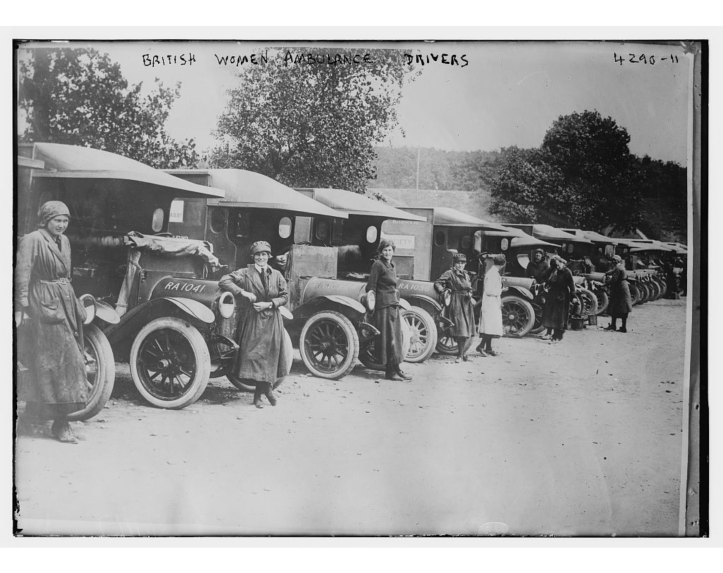 These brave women also had to combat the difficult front line terrain. Ordinary driving skill would not cut it. The driver needed to rely more than ever, on reflexes and instincts to navigate the treacherous routes. They had to combat extreme weather whilst avoid slipping into the enormous shell holes, get past unusual obstacles, through narrow gaps whilst avoiding the glue-like mud and keeping on task. Every journey there was a risk of breakdown, enemy fire, getting lost, hitting an obstacle or skidding off the road. Each journey would have taken sheer skill, nerves of true steel and the use of every sensation in the driver’s body. To top it off, drivers would also be required to develop a flawless understanding of the war-ravaged environment they were in, supposedly becoming ‘experts at the geography of hell’.

“I collected an old Flemish woman on my own. She was bundled into the ambulance by her family who could not spare the time to come with her. I was quite at the back of the Line so all should have been well but a German pilot saw what he took for an armoured car on the road. There was no cover anywhere for about four miles and I slowed and raced and generally tried to get out of the way. When the plane had gone I looked in and thought my old lady had passed on. I inquired in my best French, no response; bad Flemish, still no movement. Then, in desperation, I tried rich, broad Lancashire at which she lent up on her elbow and, cutting out all unnecessary words, we established that she was quite comfortable, had not been frightened, and I was not to worry about her.” - Beryl 'Betty' Hutchinson

“Is it much farther, Sister?”

If their societal boldness, mechanical skill, determination and courage wasn’t enough these women also endured significant physical and mental pain. If you were lucky enough to evade the enemy and avoid injury you’d still arrive at your destination feeling the physical and emotional impact of having to successfully navigate, steer and direct a tricky vehicle through a war zone with the cries of the dying and the injured in the back a constant and unwavering motivation.

The demand on the bodies of these women was tremendous; the combination of these continual duties had a real impact. Pat Beauchamp, a member of the FANY wrote “My back was aching, so was my knee (from constant clutch-slipping over the bumps and cobbles), and my eyes felt as if they were popping out of my head’ from ‘the terrible strain of trying to see in the darkness just a little further than one really could”.

As those that often stood in the way of death, the scenes and sounds of war would undoubtedly have had an effect on these women. The responsibility and pressure of rescuing and returning injured and dying men to safety was constant and unrelenting. Beauchamp again describes how it felt to be at the wheel of an ambulance, listening to the cries of the wounded men, “One of the most trying things about ambulance driving is that while you long to get the patient to the hospital as quickly as possible you are forced to drive slowly.” Due to the road conditions a 15 minute journey could take 45 minutes and the lives of the men would rest on the ability and skill of the driver.

At the end of WWI it was clear that everything had changed. Although there was further work to be done, these courageous women had not only made irreversible progress for women but also in the understanding of health care, ambulance services and the use of frontline voluntary aid in times of conflict, all whilst saving lives in the most extreme of environments.

For their bravery, the women who served in corps like FANY became highly decorated, receiving Military Medals and Croix De Guerre. Although demobbed, their skills remained in demand and many FANYs stayed in France and Belgium. They worked for the likes of the British Red Cross in Boulogne; for the Belgian Military Automobile Service in Brussels and Paris; for the Reparations Committee and for the Imperial War Graves Commission based at St Omer, amongst others.

Within the ambulance corps of WWI there are hundreds of miraculous and inspiring stories, tales and testimony of women who performed superhuman feats; but when we consider the War, these women and their contributions are sadly, so often overlooked. Yet it was largely WWI and the contribution of these women (and men) that helped lay the seeds for our ambulance service today.

However we remember them, it is hard to argue that these women were ferociously daring, bold and brave. As put by Sir Arthur Stanley, of the British Red Cross, these women most certainly had “The courage of a lion, the hide of a rhinoceros and a capacity so great that it could nurse the worst form of typhoid or start a frozen car.”

Keep following the blog as we highlight a few of these women and their amazing stories.

You can learn more about the ambulance service in WWI in NESM’s Blood, Bandages and Blue Lights exhibition or alternatively, check out the following resources for more information:

Elsie and Mairi Go to War: Two Extraordinary Women on the Western Front by Diane Atkinson

Lady Under Fire on the Western Front: The Great War Letters of Lady Dorothie

The Ambulance Drivers: Hemingway, Dos Passos, and a Friendship Made and Lost in War by James McGrath Morris Fanny goes to War by Pat Beauchamp

The road to reopening

Ask the expert: cops and the courts